Every year, people use millions of tons of explosives for mining, civil engineering, and military operations. Along with technological advances comes the risk of accidents. Although accidental explosions rarely occur, the damages they cause can be tremendously costly. A recent example is the blast that took place at the fertilizer plant in West, Texas, claiming 15 lives, injuring approximately 200 people, and causing up to $100 million in property damage.

Outside of industrial settings, the transportation of explosive materials can also be very dangerous. Researchers at the University of Utah are taking advantage of high-performance computing and NICS-managed resources to study how the risks associated with transporting explosives can be mitigated. Using a computational framework called Uintah, the team is modeling such accidents with various packaging configurations to determine the safest way to pack and ship explosive materials.

A particularly violent semi-truck explosion that occurred in Spanish Fork Canyon, Utah, in 2005 inspired this group's interest in transportation accident modeling. When a truck carrying 16 tons of mining explosives took a sharp turn a little too quickly, the entire vehicle overturned and caught fire. Within three minutes the load detonated, completely vaporizing the truck and leaving behind a crater that stretched approximately 80 feet across and 30 feet deep.

The blast was so massive that it launched hot metal shards to distances of up to a quarter of a mile away from the detonation site. No lives were lost due to the explosion, but many people sustained minor injuries from the flying debris and shock wave created by the detonation.

The magnitude of this explosion had scientists puzzled. Single explosive cylinders should not detonate under these conditions—or so the engineers thought. A milder form of combustion called deflagration should have occurred instead.

In deflagration, the explosive material burns up relatively slowly via simple heat transfer. A detonation, however, creates a massive and violent explosion that propagates through shock waves. These shock waves travel faster than the speed of sound and cause an extremely rapid increase in pressures and temperatures.

In overly dramatized explosion scenes in Hollywood movies, the characters seem to always be propelled away from the blast by some invisible force. This propelling is caused by the shock waves. Shock waves can also cause serious bodily injuries such as ruptured eardrums and internal bleeding. While deflagrations cause damage by burning, detonations are much more catastrophic.

Engineers that designed the explosive cylinders expected nothing worse than a roaring fire to occur in a transportation accident such as the 2005 truck explosion. Instead, the supersonic explosion caught them by surprise and left behind what looked more like the scene of a meteor strike than a traffic accident.

Funded by the NSF Peta-Apps Program (award 0905068), researchers at the Universy of Utah lead by Martin Berzins, Todd Harman, and Chuck Wight set out to determine the cause of this surprisingly violent explosion. While Justin Luitjens, Qingyu Meng, and John Schmidt made sure the Uintah code could be used at the large scales needed to model the problem, Jacqueline Beckvermit and colleagues addressed the modeling of the 2005 truck explosion.

Although real-life experimentation with explosives may sound like a blast to some, the costs and risks associated with blowing things up in the name of science render such research impractical. There are just too many different possible scenarios that could lead to an accidental explosion. With the help of numerical modeling and high-performance computers like Kraken and Nautilus, experimental work will no longer be required to study the characteristics of explosions at this scale. For now, however, scientists do still use experimental work to validate the new computer models.

Using the Uintah computational framework along with NICS supercomputing resources, Beckvermit is modeling the 2005 truck accident to study the safety of different packaging configurations for an explosive called PBX9501. The results of the research should help engineers greatly reduce the chances of accidental explosions.

The Uintah software originated at the University of Utah Department of Energy Center for the Simulation of Accidental Fires and Explosions (C-SAFE) in 1997. It was developed to model energetic devices in fuel fires.

“When the Spanish Fork Canyon accident happened in 2005, the Uintah group felt it they had a novel approach to analyze the accident and help prevent it in the future,” says Beckvermit.

The Uintah group suspects that a mode of combustion called a deflagration-to-detonation transition (DDT) occurred in the truck accident. DDTs tend to create extremely violent explosions, and their cause is not yet well understood. Scientists have proposed many different DDT mechanisms, but the cause for such reactions remains unclear. Beckvermit and her team are investigating the causes of the phenomenon.

Based on their computer models, researchers with the Uintah group hypothesize that inertial confinement, or the way that the explosives were arranged in the trailer, caused the deflagration in this particular accident to transform into a detonation.

“Under ambient conditions deflagration only burns the surface of a combustible solid,” explains Beckvermit. When burning causes the explosive material to crack, the burning spreads inside the material. This process is known as convective deflagration.

The increase in burning surface area of the explosive subsequently speeds up reaction rates, causing increasingly high pressures during the deflagration. The Uintah group suspects that this pressure increase confined by inertial confinement causes the transition to detonation.

By packing the explosive containers in a way that prevents inertial confinement and convective deflagration, engineers can hopefully eliminate the chances of a detonation occurring in accidents that involve the transportation of explosives. Determining the level of inertial confinement needed for a DDT is computationally expensive, requiring the use of high-performance computers such as Kraken (award TGMCA08X004), Nautilus, and Titan (incite award ENP009).

To investigate the DDT mechanism, the team ran several computer simulations with the explosive PBX9501. The material was packed into a steel shell and heated. As the material burned, or deflagrated, the burning created pressure waves that propagated in all directions throughout the container. When these pressure waves collided, they coalesced to produce pressures high enough to cause detonation. The Uintah group has proposed that the interplay of pressure waves leads to DDT.

Simulating accidents such as the 2005 truck explosion involves modeling on multiple spatial scales. While the chemical reactions that drive an explosion occur at the micrometer scale, or the mesoscale, engineered parts and entire trucks must be modeled at the macroscale.

Mesoscale simulations may represent physically small situations, but they can be very computationally expensive. Combining science at the mesoscale and macroscale (and everything in between) to create detailed and accurate simulations requires a tremendous amount of computational power.

Beckvermit runs her DDT simulations on the NICS Kraken and Nautilus supercomputers. The calculations run on Kraken, using up to 36,000 processors for up to 30 hours. The visualizations are then performed on Nautilus.

“With the use of Nautilus, it is very easy to monitor my simulations visually and make changes as needed while running large jobs on Kraken,” says Beckvermit.

A deflagration-to-detonation (DDT) transition in an array of confined explosives. Twelve cases containing 20 explosive cylinders each are depicted. The colors represent the pressure inside each container. Deflagration begins in the bottom left corner as the result of an applied heat stimulus. As burning spreads to adjacent containers, the pressure inside rises as well. The detonation, shown in red, occurs before the pressure wave hits a symmetric boundary, suggesting inertial confinement can lead to DDT. 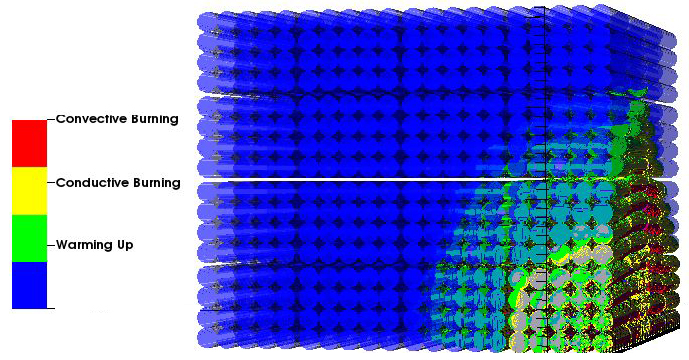 Three-dimensional simulation showing the spreading of deflagration in 1,279 explosive cylinders. Unaffected areas are shown in blue; green areas are warming up; yellow areas exhibit conductive burning; red represents convective burning. These simulations are currently being run on the Titan supercomputer using up to 90,000 processors. 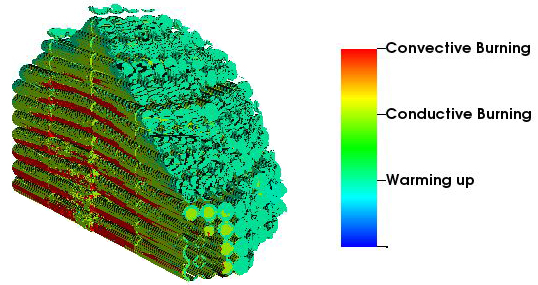 Another angle of the same deflagration process as shown above, but this image excludes the blue, unburned cylinders.

Although the 2005 Spanish Fork Canyon truck explosion inspired this research, the results will have other implications for science as well.

“We are trying to model the specific accident that occurred in Spanish Fork Canyon, but in doing so we are also learning about the fundamental mechanism of a deflagration-to-detonation transition,” says Beckvermit.

“The results from this research will give insight into safer packaging configuration for the transportation of explosives, but it will also help explain a deflagration-to-detonation transition for large arrays of explosives.”

While Beckvermit believes that accidental explosions can never be completely preventable, she believes that her research “will decrease the probability of accidents and prevent as many as possible.”