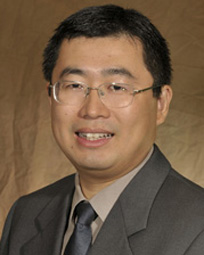 Yanfei Gao is a joint faculty member of the materials theory group in the Materials Science and Technology division at Oak Ridge National Laboratory(ORNL), as well as an associate professor and director of graduate studies in the Department of Materials Science and Engineering at the University of Tennessee(UT). He earned his B.S. degree with the highest honors in the Department of Engineering Mechanics, Tsinghua University, Beijing, China in, 1999, and his M.A. and Ph.D. degrees in the Department of Mechanical and Aerospace Engineering, Princeton University, New Jersey, in 2001 and 2003, respectively. His thesis work identifies and simulates mechanisms of mechanically and/or electrically induced compositional self-assembly at nanoscale. From March 2003 through July 2005, Gao worked as a post-doctoral research associate in the solid mechanics group, Brown University, on surface plasticity and adhesion, microstructural evolution, and structural integrity. Since joining UT/ORNL in August 2005, Gao has built up his research group on plasticity at small length scales, thin-film growth, contact and friction, and constitutive behavior of amorphous alloys, among many others. Most of these projects are motivated from his colleagues experiments at UT and ORNL.

In 2010 Gao received a Professional Promise in Research and Creative Achievement Award from UT Chancellor for pioneering multiscale modeling of failure mechanisms in advanced structural materials. He was elected a Research Fellow for UT College of Engineering in 2010 and 2013.

Gao has authored or co-authored more than 60 technical papers (including seven invited contributions) and has made more than 60 presentations (20 invited) at national/international conferences and academic institutions.

Gao's group uses computer simulation, theoretical modeling, and experiments to explore the mechanisms of plastic deformation and fracture of a variety of advanced structural materials. These materials include superalloys, bulk amorphous alloys, and single nanoscale crystals with low-defect density. One project of recent years pertains to the fracture and fatigue of structural alloys. While these materials underpin most energy and transportation systems, placing them at the heart of modern life, the limited knowledge of their lifetime and failure mechanisms restricts their technological viability. The multiscale nature of deformation near the crack tip permits a scale-bridging modeling method. The macroscopic flow model and an irreversible interface approach led the researchers to the deformation near the crack tip, which will serve as inputs to a plasticity model to determine the inter- and intra-granular deformation behavior in various simulations—specifically, finite element methods (FEM), molecular dynamics (MD), and density function theory (DFT). Also related experiments were performed at Oak Ridge National Laboratory and Argonne National Laboratory. Conversely, comparisons with simulations and experiments provide insight into the microstructure evolution during the cycle deformation and assist in the development a mechanism-based plasticity model that can find tremendous applications in tuning plasticity and failure resistance of structure alloys. The research in mechanical-properties testing combined with experiment measurements enhance the fundamental knowledge of plasticity, fatigue, and failure mechanisms of alloys by connecting the macroscopic behaviors with microscopic responses. Related works were published in prestigious journals in the solid mechanics field.